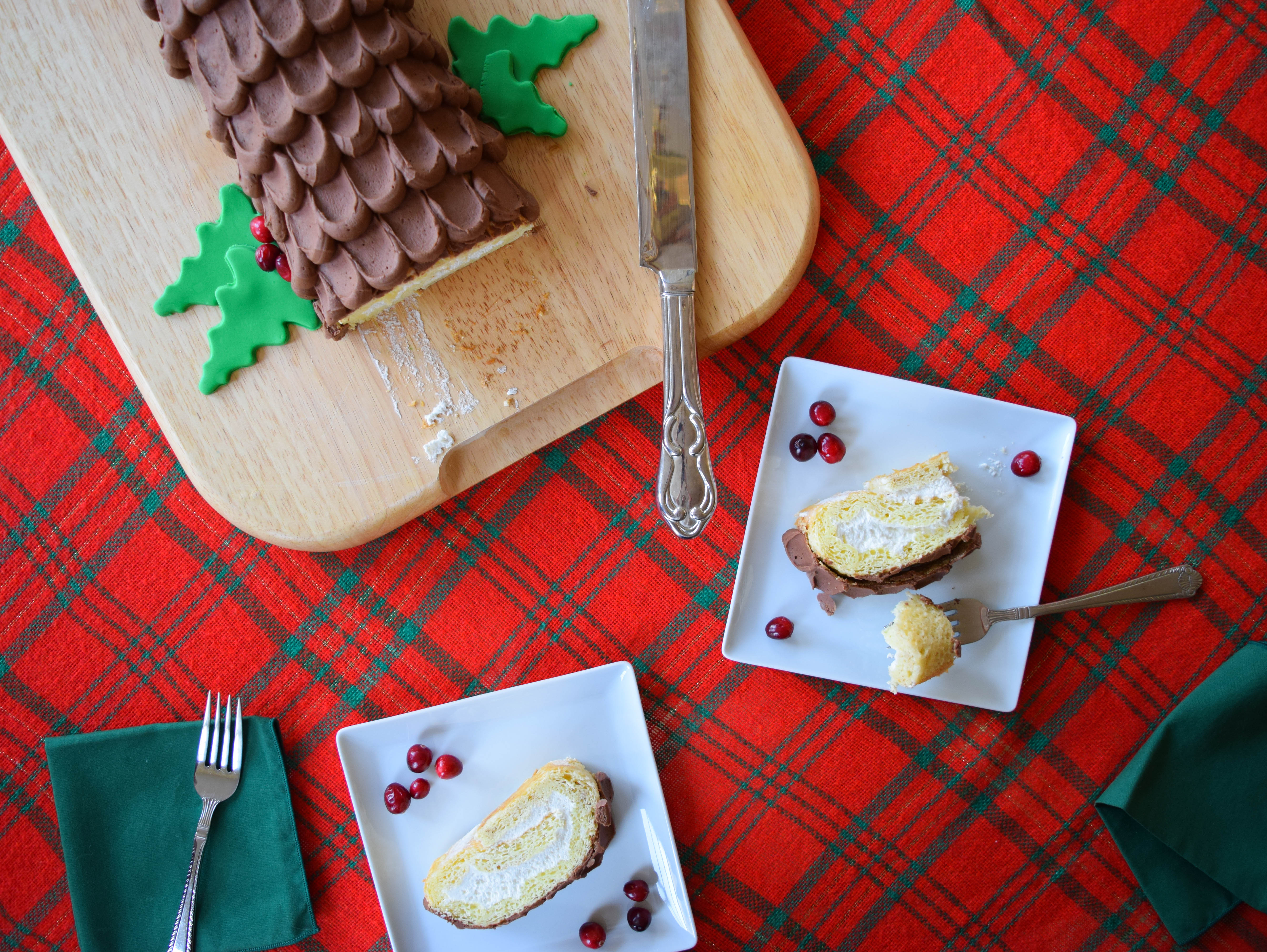 The Buche de Noel, or Yule Log, always fascinated and intimidated me. I assumed such a beautiful cake had to be impossible to make. Even after receiving a culinary school degree and working as a pastry chef in New York, the Buche de Noel seemed to haunt me. But finally, I grit my teeth and decided to make one.

After weeks of research, I decided to throw caution to the wind and make up my own approach. I thought if I could combine elements I already knew how to make, sponge cake, whipped cream, and chocolate frosting, making this cake would seem less daunting. I was right! It turned out to be a snap! Not only is this cake actually easy to make; but also, it’s quite fun! Most importantly, it is delicious! The sponge cake and whipped cream form a cloud-like center and the chocolate buttercream adds decadence. I am starting to think this cake should be served all year!

For the Whipped Cream:
1 pint of heavy cream
1/4 cup of confectioner’s sugar
1 teaspoon of vanilla extract

Directions
Preheat the oven to 350° F. Line a 9 x 13 inch jellyroll pan with parchment paper and grease the paper. 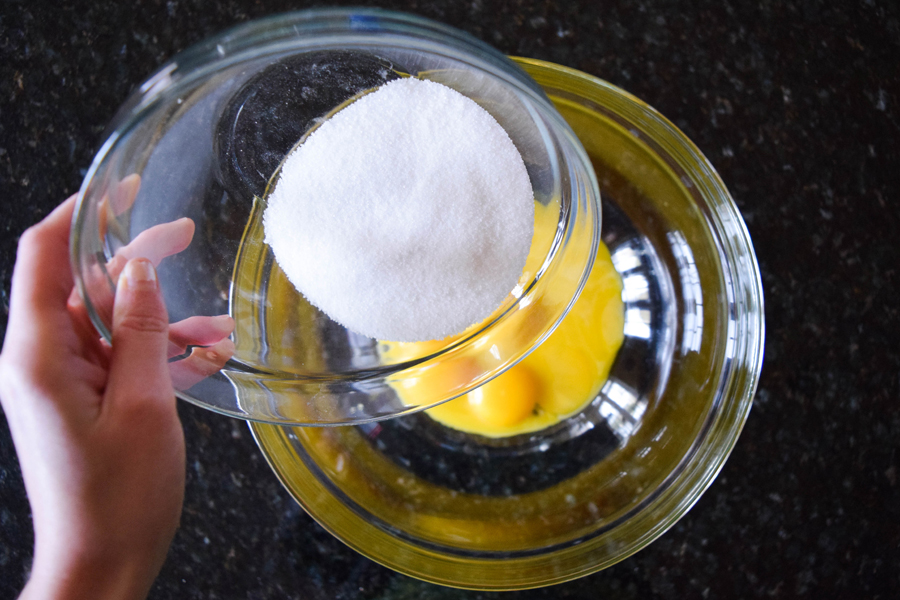 To make the cake, whisk together the egg yolks and the sugar in a large bowl. 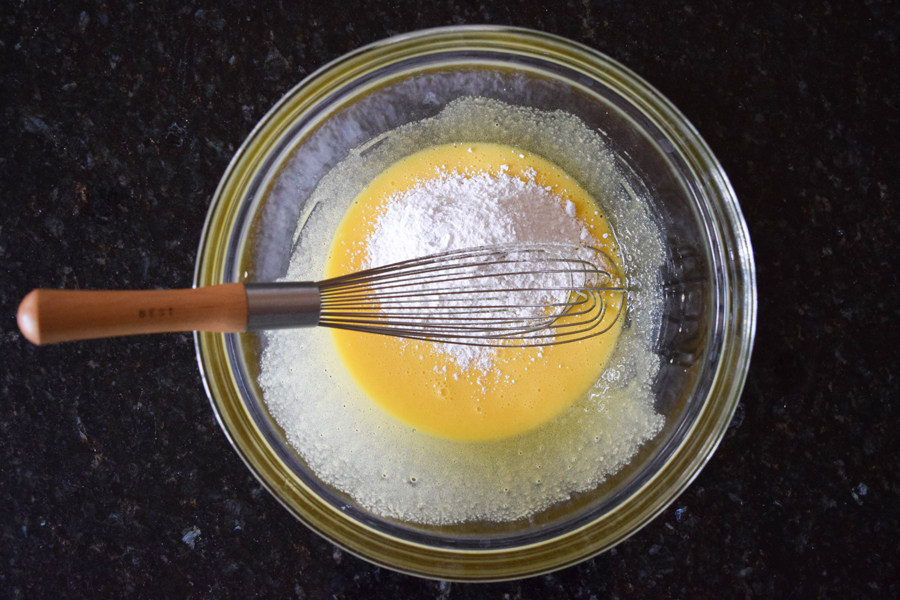 In a small bowl, whisk together the cake flour and the baking powder. 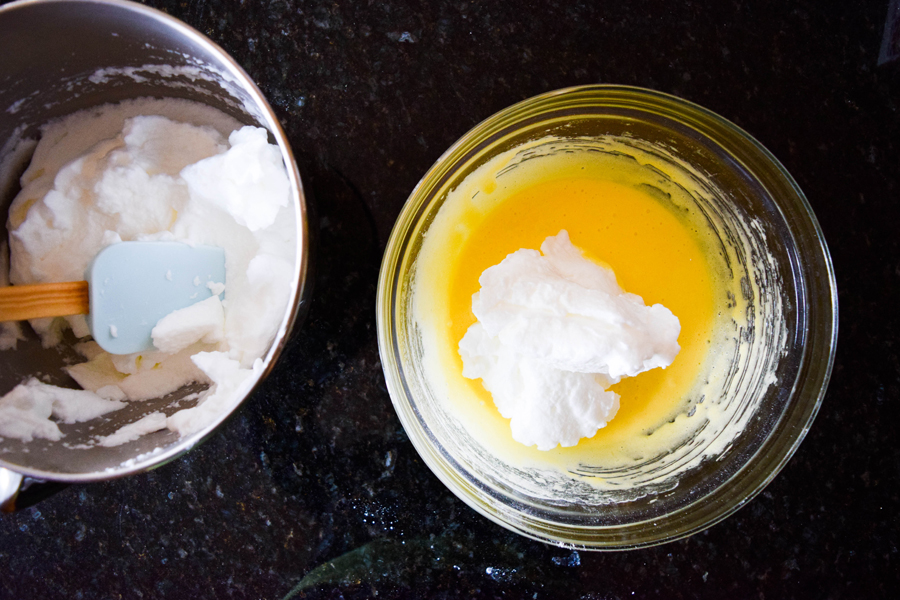 Add the dry ingredients to the egg yolks. 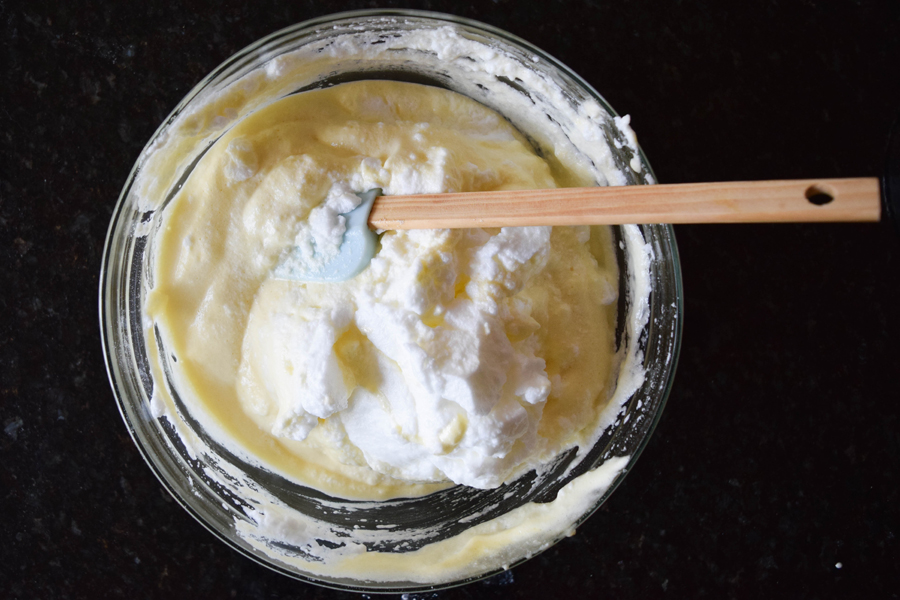 In the bowl of an electric mixer with a whisk attachment, whip the egg whites until they form firm peaks. Add 1/3 of the egg whites to the cake batter and slowly fold them in. Fold in the remaining egg whites. 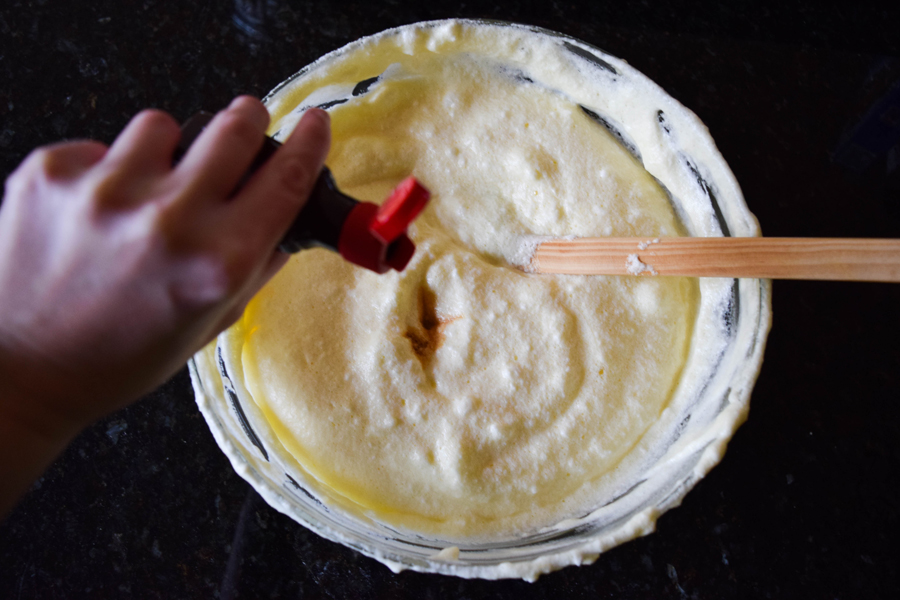 Once most of the large lumps are gone, add the vanilla. 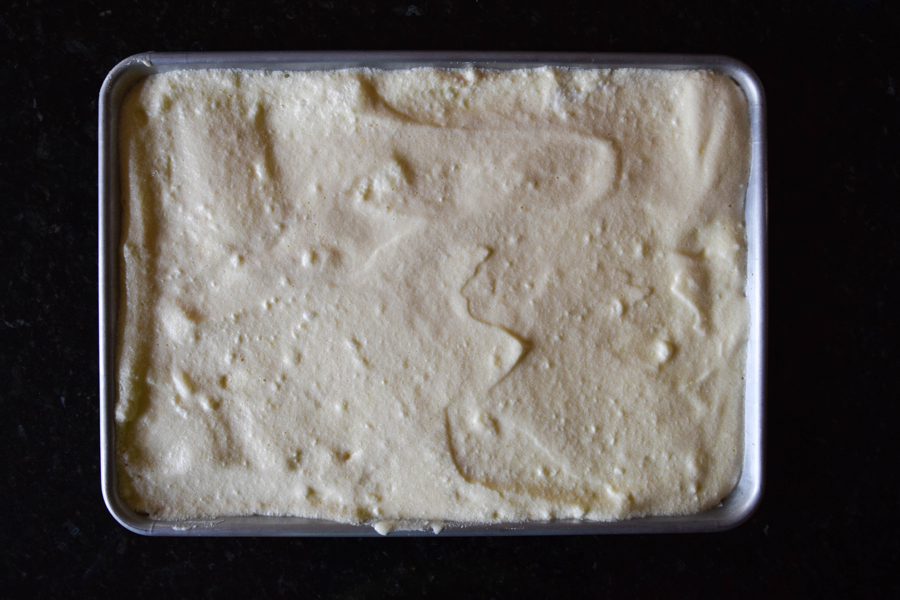 Spread the batter into the prepared pan and place in the oven and bake for 20 minutes, rotating the pan halfway through. Once the cake is golden around the edges and springs back to the touch, it is ready. 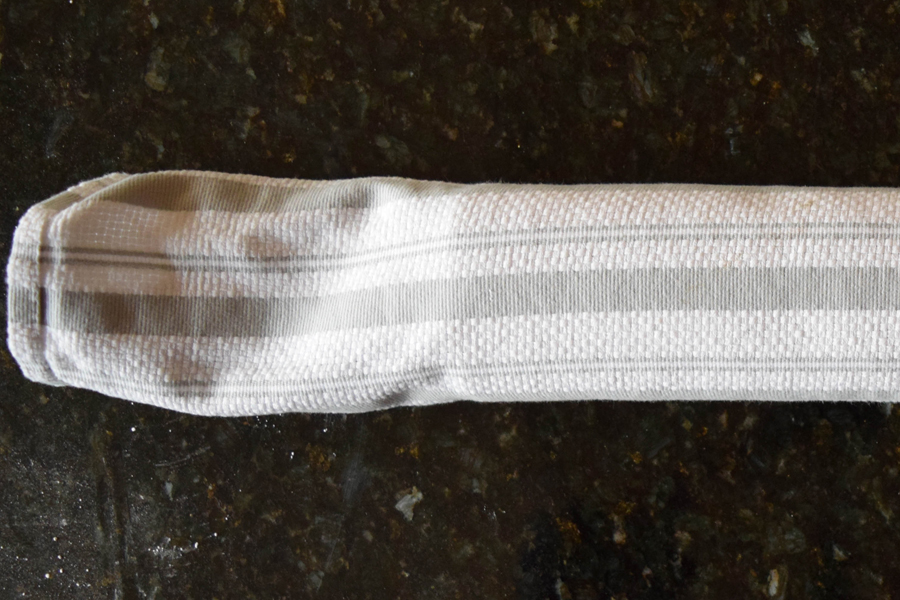 Before the cake cools, remove it from the pan and turn it out onto a dishtowel that has been dusted with confectioners’ sugar. Using the dishtowel, roll the cake into a log and set aside to cool.

Next, make the whipped cream. 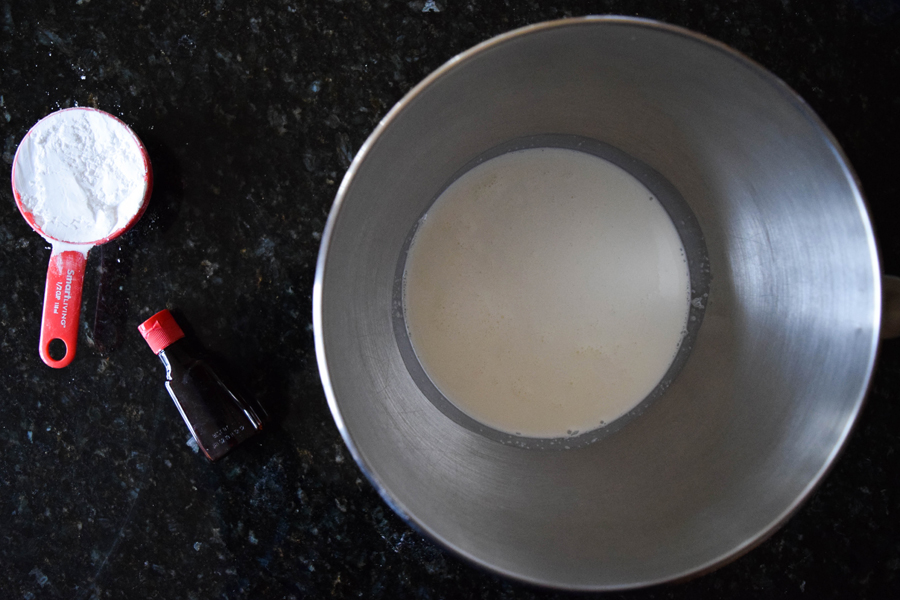 Put the heavy cream in the bowl of an electric mixer fitted with a whisk attachment. Whip the cream until it starts to thicken slightly. Add the sugar and vanilla. 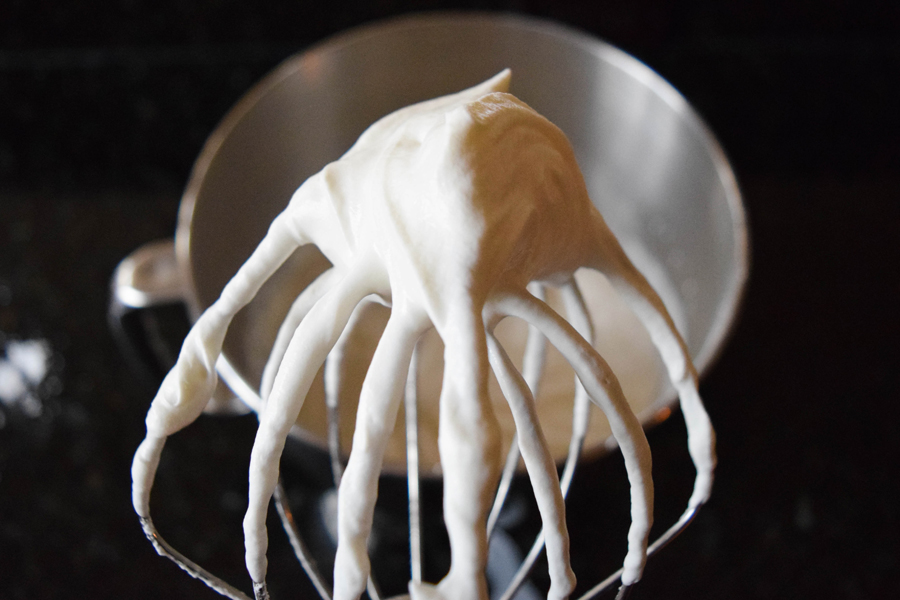 Whip the cream until soft peaks form. Set aside.

Next, to make the buttercream. 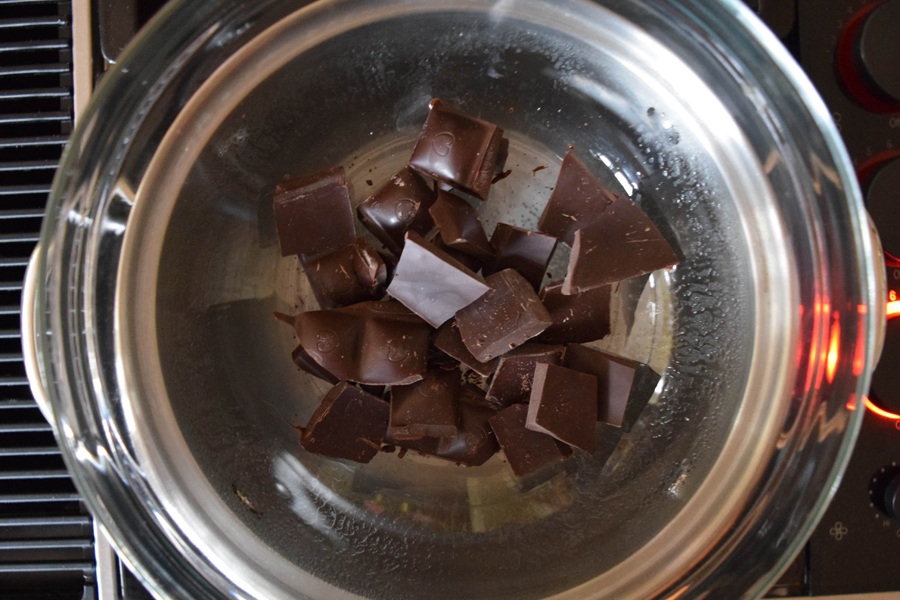 Set a heatproof bowl over a pot of simmering water, add the chopped chocolate and melt. You can also melt the chocolate in a microwave by heating it for 30 seconds, stirring it, and then continuing to heat it in 30 second increments until melted completely. Set the melted chocolate aside. 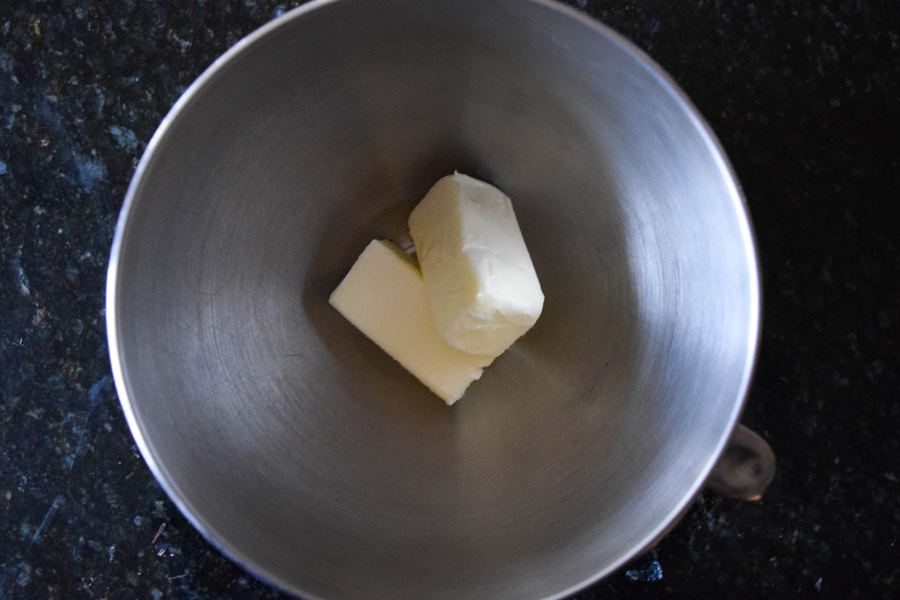 Place the butter in the bowl of an electric mixer fitted with a paddle attachment. Mix until the butter is light and fluffy. 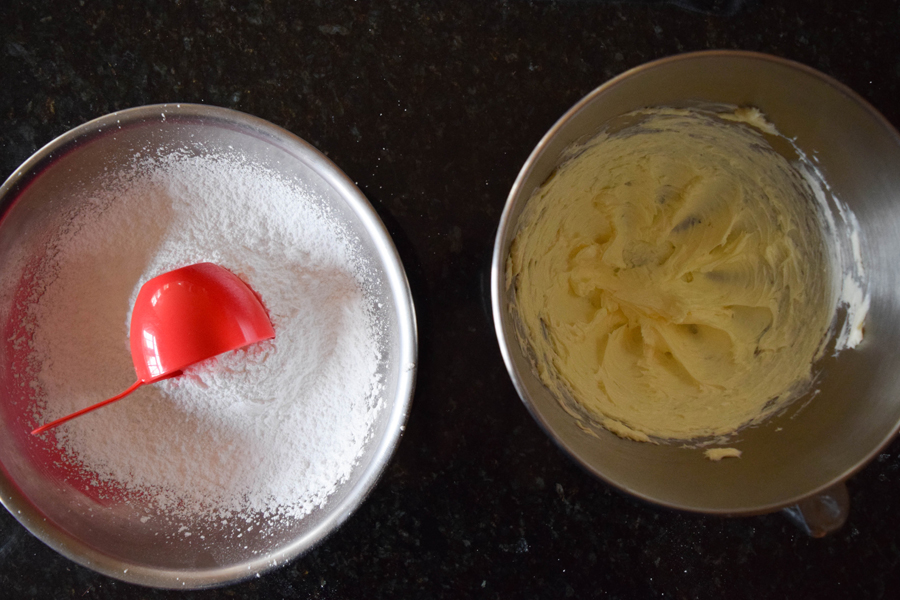 Add the confectioners’ sugar and mix until completely combined. 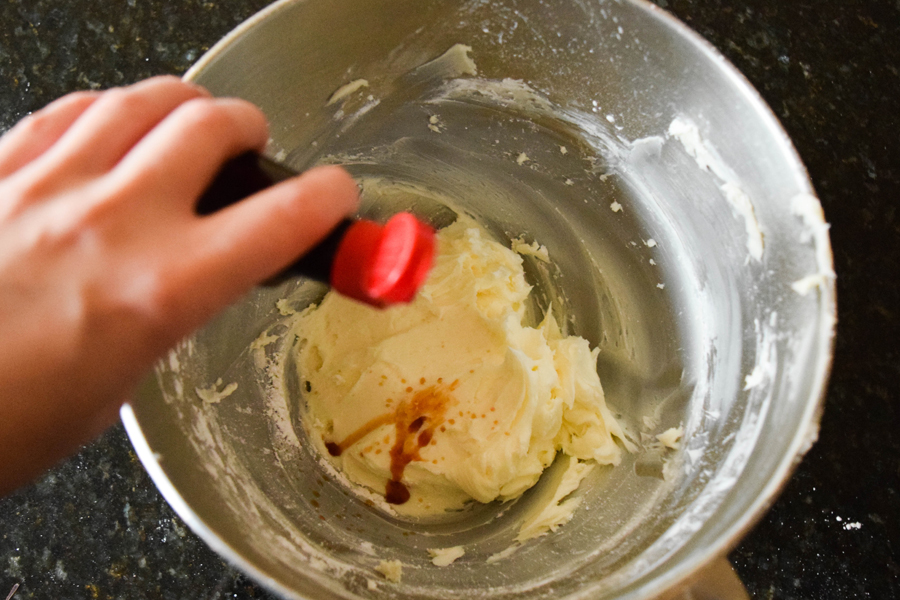 Add the vanilla and mix. 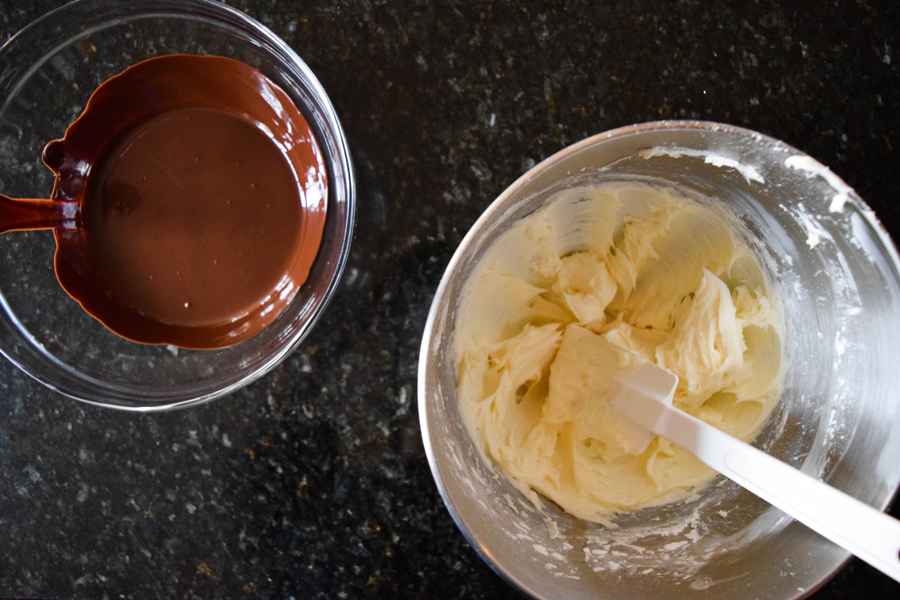 Finally, add the cooled, meted chocolate and mix until the chocolate is completely incorporated. Set the frosting aside. 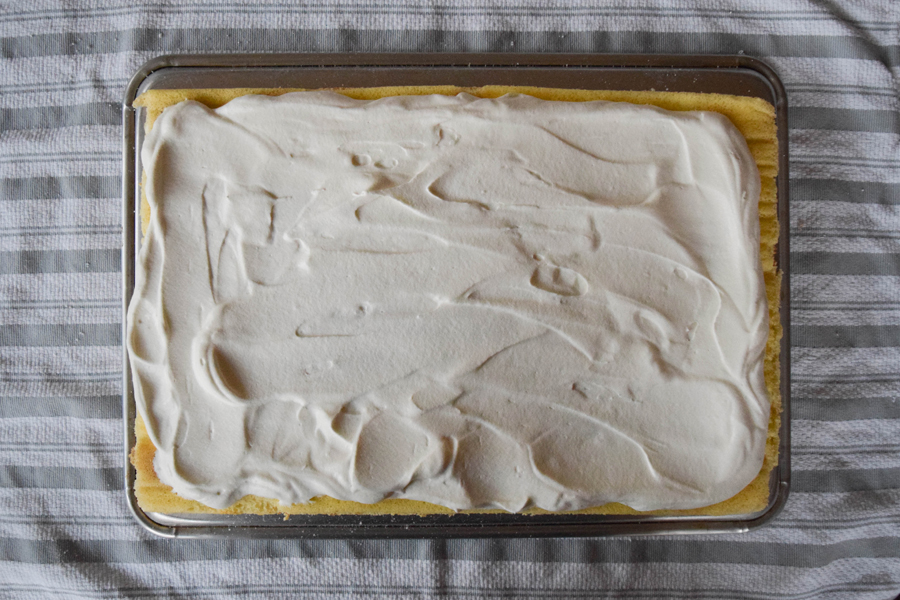 To assemble the cake, unroll it onto a cutting board or the back of a sheet tray and smear it with whipped cream, leaving a little border. 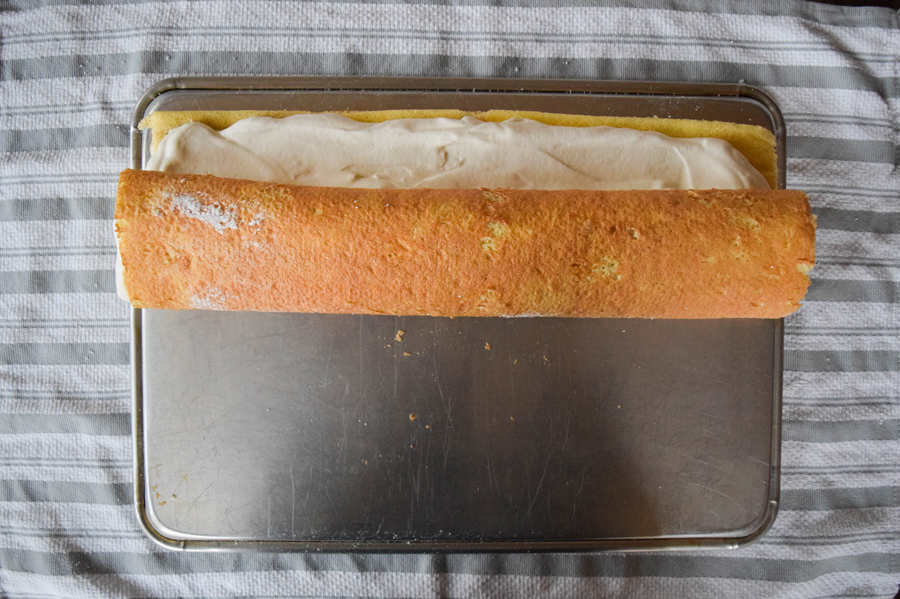 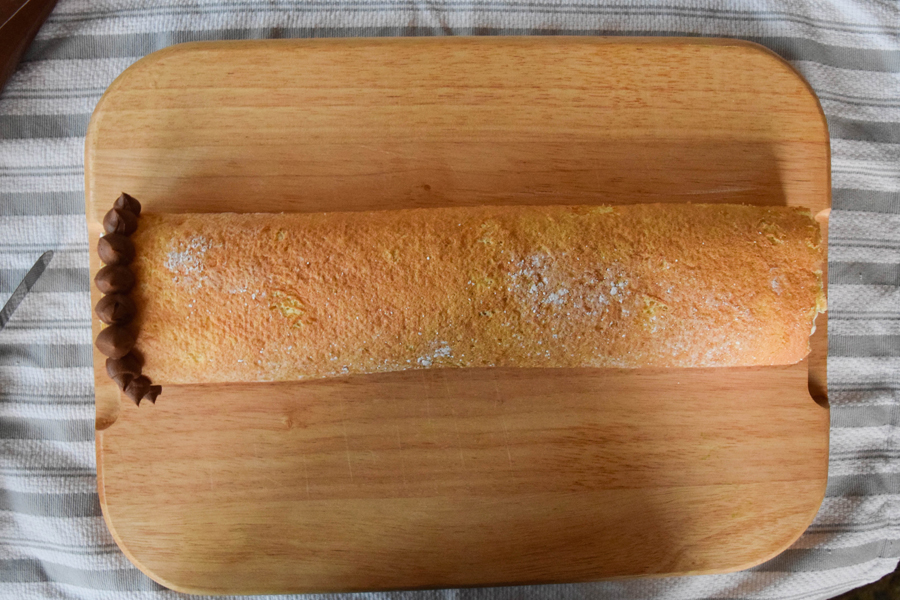 To make the “bark,” pipe a row of chocolate buttercream dots around the circumference of one end of the cake. 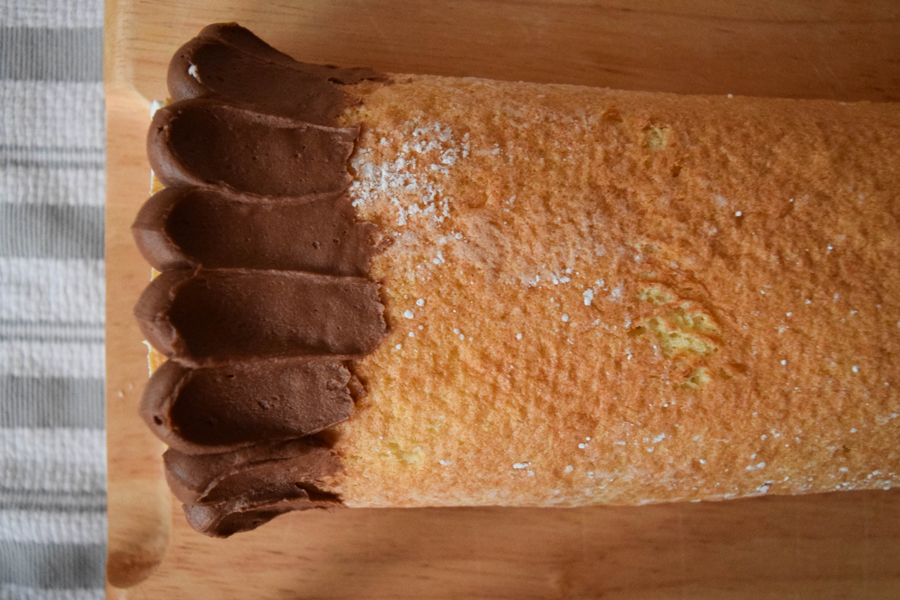 Next, place an offset spatula or butter knife with a rounded tip in the center of the chocolate dot. Drag the buttercream towards the opposite end of the cake. 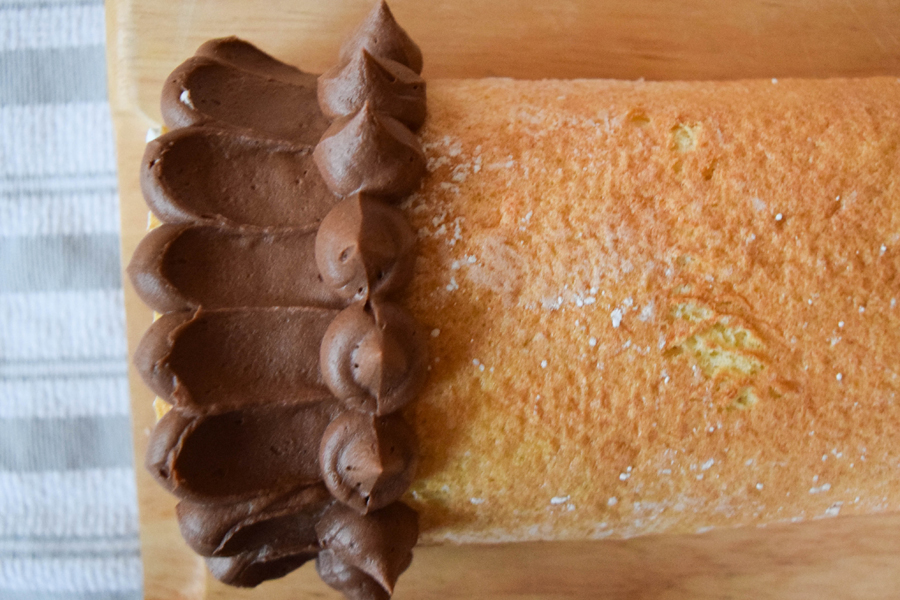 After you finish the first row repeat the process. Start the next row of chocolate dots slightly overlapping the first. 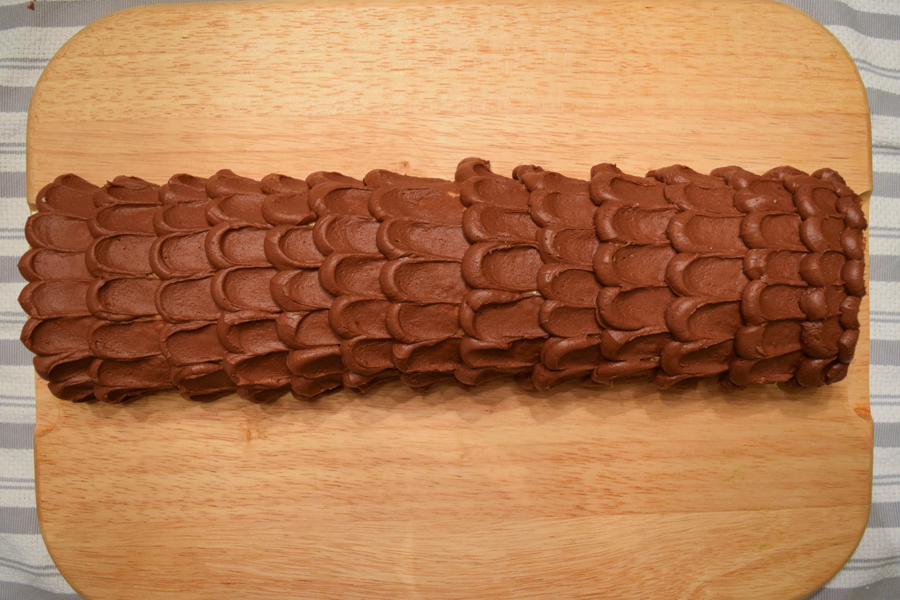 Continue the process until the cake is covered from end to end. 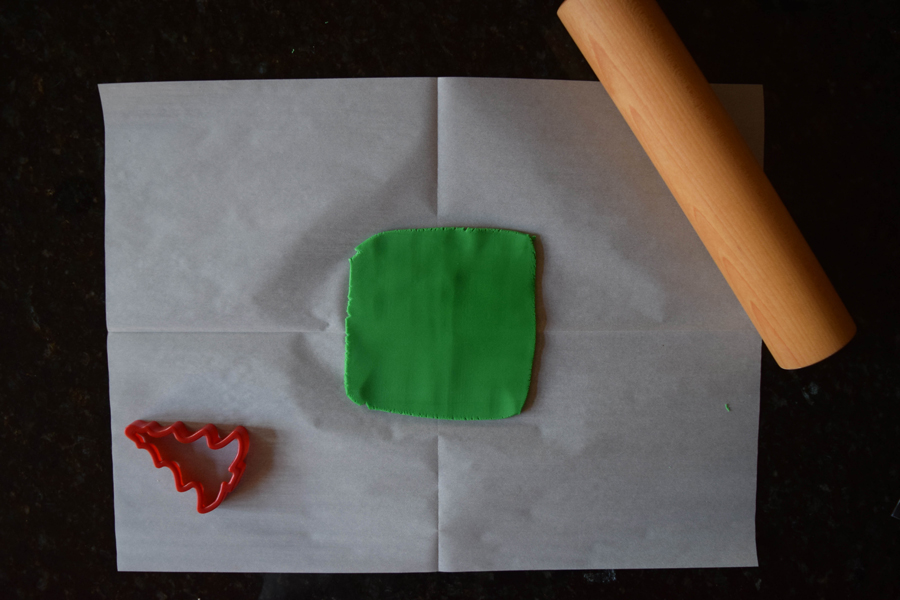 If you would like to make the fondant leaves, roll the fondant out to a quarter inch in thickness. Using a cookie-cutter, cut small leaves. Arrange around the cake with some cranberries. 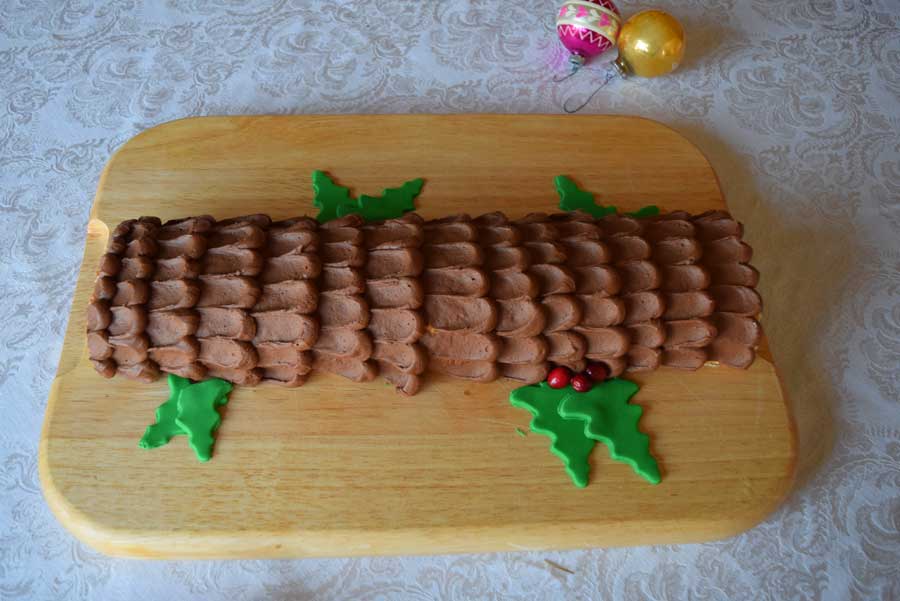 Place the Buche de Noel in the refrigerator for at least an hour before slicing and serving.